How Buzzwords, Lingo, And Jargon Make You Appear Less Competent And Forgettable 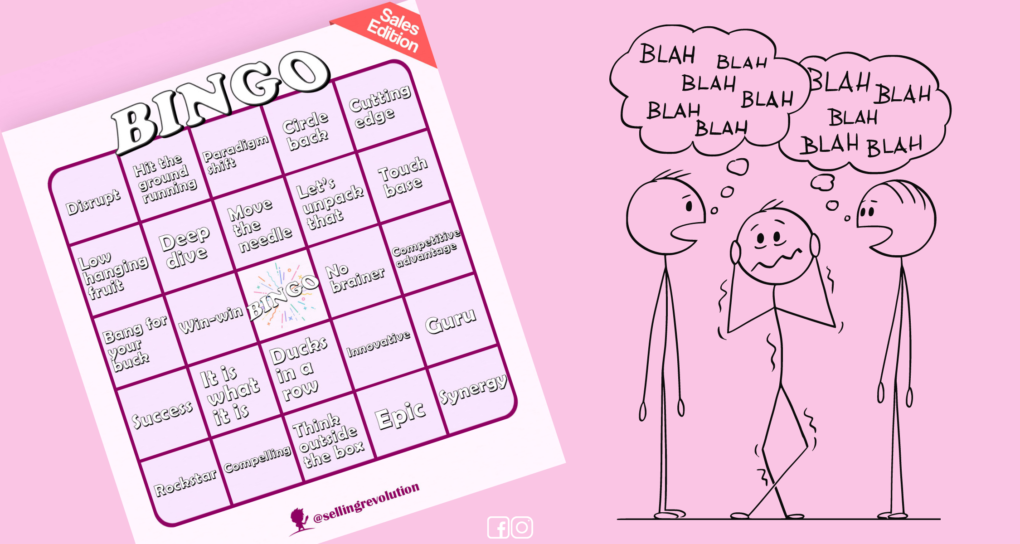 Buzzwords, jargon, and lingo are meaningless concepts to your customers. They describe nothing concrete. For example, when someone says “synergy” (*shudder*) what do you even picture in your head? More importantly, what do you think your prospect is picturing in your head? You have no idea. Use words that are concrete and more visual to give both of you a better chance of thinking in harmony. It increases the odds of you both seeing where the other is coming from.

Are you talking to your customer as if they are the hero in their own story? Or are you trying to impress them with fancy-schmancy jargon? Quit talking circles and using empty words, and instead have the cojones to talk straight. Buzzwords are lazy and insult the intelligence of your audience. Let’s collectively agree to stop using these phrases that have been used up to the point of meaninglessness.

Hearing consistent use of business jargon feels like sitting through a lecture or presentation. What you really want to do is converse and connect with the person on a relatable level that promotes trust and partnership.

Even the word Bingo is overused. How about we call it what it really is. MALARKEY. That’s more fun to say. 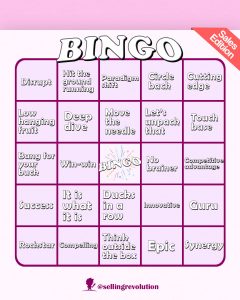 Disrupt – If what you’re doing is truly disruptive, you don’t need to say it. Others will say it for you.

Hit the ground running – 89% of pitches end on this line. (Do the other 11% even know what they’re doing?! ) A classic closer meant to get asses in gear. If you really want ’em to start running, point and scream, “SPIDER!” (In my experience that gets people moving.)

Paradigm shift – Also known as a game-changer. If what you’re doing is radically altering the way things have always been done, then say THAT.

Circle back – a phrase used to get you, the sucker, to pay attention to what they were saying earlier.

Cutting edge – when they can’t think of anything more exciting to describe the mediocre product they’re pushing.

Touch base – for when they’re going to “circle back” and ask you how you’re coming along with that final “No” you’ve been working on.

Let’s unpack that – Let’s dump this unlabeled box of crap on the table so we can really see what we’re working with.

Deep dive – You could instead hold a magnifying glass to this phrase and burn with the power of the sun. To drill down, in simpler terms, means to investigate, analyze, or explore. Or my personal favorite, “probe.”

Low hanging fruit – The first instance of someone taking advantage of low-hanging fruit ended in original sin and a bunch of people are still grumpy about it, so… Let’s just cut that shit out.

Bang for your buck – A greasy way of saying that something is of exceptionally high value.

Win-win – If it’s truly a win for both sides, you won’t need to say it. Mostly we use win-win when we want the other side to feel better about getting shafted.

No brainer – A slightly nicer way of saying that you don’t need a brain to make this decision, because it’s THAT obvious. How about we stop being so condescending and instead say something like, “Easy peasy lemon squeezy.” Because who doesn’t love saying that.

Competitive advantage – It’s too puffy-chesty. A little too proud of itself. I’ll admit, I’m guilty of using this one, a lot. Yes, I have a problem. I promise to quit. Instead, let’s come up with new ways to say that you do it better than your competitors. Like, “outshoot” or “run laps around” or “ask those poor schmucks how our dust tastes.”

Success – I’m sorry but the phrase “success” can suck my balloons that I’m bringing to this word’s retirement party. It’s time we start measuring our “ass-kicking ability” and defining what “drinking the blood of our enemies” means. What’s your pathway to “total domination” look like? What’s your recipe for “dunking on the competition?”

It is what it is – THIS worthless phrase. I’d rather chew aluminum foil because it hurts less. It’s what people say when they have nothing to say, but still want to sound like they know something. While we’re wasting oxygen, try these equally meaningful phrases: “This cat is a cat” or “hot things are hot.” Or you could say nothing and sit in silence until the other party breaks because that’s a power move.

Ducks in a row – Nonsense. Studies show that ducks refuse to be in a row longer than an Olympic second. So when you say you have your ducks in a row, you mean a zig-zagging mass of quacking feathers and flappy footsies. Just say organized, and save yourself the embarrassment.

Innovative – Don’t say your service or product is innovative. Instead, SHOW them.

Guru – Anyone who labels themselves a guru is not to be trusted.

Rockstar – The only people who deserve to be called rockstars are actual rock stars. If you ain’t selling out arenas, buddy you ain’t no rockstar. And don’t get me started on “ninja.”

Compelling – If you have to state that something is compelling, you’ve already lost. For example, the phrase “compelling copy” gets my slapping hand itchy. Anyone who describes their copy as compelling is an uncreative lazy liar-face.

Think outside the box – Supposed to indicate creativity, but what really needs more creativity is the person spitting this overused phrase out of their word hole.

Epic – Did you scale Mt. Everest? Invent the lightbulb? Fly the world solo? Put your camp tent back in its original sack, poles, and all? Because those are truly epic feats. So calm down.

Synergy – Yes, it’s important to make sure your prospect knows that 1+1=3 when they do business with you. But that word is older and dryer than King Tut’s unmoisturized skin. Try something fresher like a high five while shouting “VIBE CHECK!”

BONUS: Let me be honest with you. It doesn’t take Mike Tyson’s Mystery Team to figure out that when someone says this, you gotta wonder what they were DIS-honest about with you.